What Is Non Hazardous Waste?

Although by definition, non hazardous waste doesn’t sound like it poses a threat, this type of waste can cause significant environmental damage.

That’s why state and local governments often regulate non hazardous waste, and why it’s important to properly dispose of your waste to ensure you’re meeting all appropriate regulations.

In the industrial sector, in particular, non hazardous waste can be generated during the production of goods and products. According to the U.S. Environmental Protection Agency, examples include electric power generation and the manufacturing of materials such as pulp and paper, iron and steel, glass and concrete.

If your company generates non hazardous waste, it may be tempting to simply dump the waste in your nearest trash bin. Doing so, however, can land your company in trouble, leading to steep fines for improper disposal.

Knowing the proper course of action depends heavily on knowing common non hazardous wastes, how to identify your waste and how to properly dispose of it. 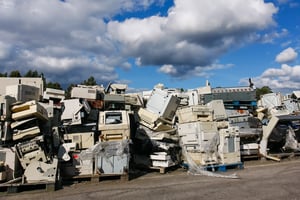 The vast majority of waste produced in the United States is considered non hazardous. However, when it comes to waste found in industrial, medical and office settings, defining whether that waste is hazardous or non hazardous gets a little more tricky.

While our article, Examples of Non Hazardous Industrial Waste, further explores the most common types of non hazardous waste found in these settings, here are a few you may recognize as something you have on your property.

Common industrial materials that are considered non hazardous in most states include ash, sludges, antifreeze, grinding dusts and liquids contaminated with non-hazardous chemicals.

Examples of non hazardous medical waste include plastic packaging, clean glass and plastic, paper and cardboard, and office products. Many medical products and treatments are stored in aerosol cans. In California, aerosol cans are not considered hazardous waste as long as they are completely depleted.

California has some of the most strict e-waste laws on the books. However, there are some forms of electronic waste that continue to be classified as non hazardous.

For example, the aluminum that is often found in electronic goods is considered to be non hazardous, as are copper and gold … two materials often found in computer parts. Plastic and glass parts are generally not hazardous as well.

However, because many of the examples above refer to parts, and not the electronic device as a whole, it can be difficult and time consuming to separate the non hazardous parts from the hazardous parts. It is usually better to simply recycle electronic waste at a facility that will accept your equipment.

Correctly identifying whether a waste is hazardous or non hazardous is one of the most important aspects of ensuring your company is meeting all local, state and federal regulations.

After all, before you can determine how to store and dispose of a waste, proper identification is necessary.

While some non hazardous waste is easier to identify than others, lab chemical waste and medical waste can be more difficult. Especially when working with waste such as this, it is critical to partner with a reputable disposal company that will identify wastes through sampling and testing so you can be certain the waste you generate is taken care of properly.

Once a waste is identified, the disposal company can then certify that waste as non hazardous, reducing your risk of running into trouble with authorities during the disposal process.

In California, however, the Department of Toxic Substances Control requires that other electronics like cell phones, radios and computers be disposed of as hazardous waste.

Although you have identified your waste as non hazardous, proper disposal of that waste is just as important, even if it has not been deemed an immediate public threat. For example, any type of waste can be harmful to the environment through other means, such as methane emissions during decomposition.

1. Taken To A Disposal Site

Depending on the amount of non hazardous waste you need to dispose of, you may be able to simply take it to a Treatment, Storage and Disposal Facility (TSDF) or landfill. However, check with the disposal facility first to determine whether it accepts your waste and the quantity allowed.

Depending on the type of non-hazardous waste your facility produces, a recycling facility may accept it. CalRecycle, California’s recycling and waste management program, oversees the recycling of several types of waste that businesses and facilities produce. This includes materials such as electronic waste, paint, organic material and beverage containers.

3. Work With A Disposal Company

For those who routinely generate non hazardous waste, working with a reputable disposal company can provide peace of mind that all cradle to grave requirements are being met as well. These specific regulations state that your company is responsible for all waste from the moment it is generated to the moment it is disposed of.

This places the burden on you to ensure your waste does not pose a threat to the community, and a certified non hazardous waste disposal company can work with you to make sure your company meets those requirements so that you can focus on the day-to-day operations of your business.