Hazardous waste violations can lead to costly fines and devastating consequences. Yet many companies disregard regulations put into place to protect communities and the environment from toxic substances.

Look no further than the Chemical Waste Management (CWM) facility in Kettleman City. On March 27, 2013, the California Department of Toxic Substances Control (DTSC) announced a fine against the facility in the amount of more than $291,200.

The DTSC also required CWM to reimburse the government costs of nearly $20,000, bringing the entire amount CWM was required to pay to more than $311,000.

Below we’ll discuss how CWM found itself in trouble after a series of reporting errors, how it should have served as a warning to other hazardous waste generators and what manufacturing facilities can do today to learn from these companies’ mistakes. 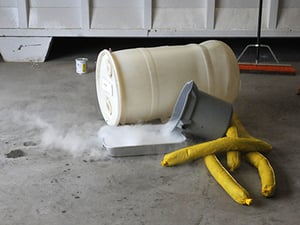 CWM’s failure to report 72 spills at its San Joaquin Valley facility to the DTSC over a four-year period (2008-2012) largely contributed to the company’s fines of more than $300,000.

During a routine inspection in April 2012, DTSC officials discovered that CWM had created internal reports documenting spills that had occurred, but failed to notify the state department.

While DTSC discovered no evidence to suggest that any of the 72 spills that occurred mostly in the facility’s loading and sampling areas posed a danger to nearby communities or the environment, CWM violated the requirements its permit imposed.

The company’s permit allowing it to generate hazardous waste required:

In addition, DTSC required CWM to pay the total settlement amount within 30 days of the effective date of the settlement.

In a statement issued by DTSC Deputy Director of Enforcement Brian Johnson, “Our job is to ensure that facilities operate compliance with the hazardous waste control laws and to hold them accountable when they don’t. This is a significant fine that underscores our commitment and sends a clear message to communities that DTSC will protect violations of the hazardous waste control laws.”

A Warning To Others

However, their mistakes didn’t serve as a deterrence to others to clean up and follow proper protocols for adherence to hazardous waste regulations.

In fact, in 2012, drugstore giant Walgreens faced $16.5 million in fines after reaching a lawsuit settlement. The Illinois-based company was accused of illegally dumping pharmaceutical and biohazardous wastes throughout California.

The settlement agreement, reached in Alameda County Superior Court, ended a joint lawsuit filed by district attorneys representing more than half of the counties in the state, including Alameda County.

The lawsuit claimed that Walgreens employees illegally dumped pharmaceutical and biohazardous waste into regular trash bins rather than send the waste to authorized disposal sites.

Also that year, Costco Wholesale Corp. had to pay $3.6 million in fines in a settlement that state regulators announced over improper storage, handling and disposal of hazardous waste and pharmaceutical waste products in many of their stores.

All of these fines further point to the need for hazardous waste generators to have procedures in place that ensure employees follow proper labeling, storage and disposal of hazardous waste, as well as adequate training of personnel.

Failure to follow DTSC guidelines and your own permit requirements will land you in trouble and force you to pay expensive fines. It is important to get expert help if you aren’t sure of your responsibilities.

Our article, How To Find A Hazardous Waste Disposal Company In Los Angeles, outlines what you need to know about finding the right company that will ensure you meet all cradle to grave requirements.

Finding a licensed and reputable company is critical and should be a carefully-considered process, taking into account reliability, reputation and legality.