What Is Soil Pollution?

Soil pollution is a serious concern because of the impact it has on human health and the environment. Its impact can cause a chain reaction, affecting areas like biodiversity, food security, groundwater and even economic aspects. 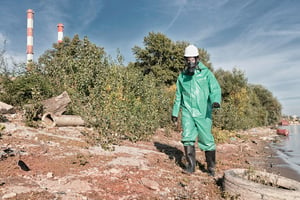 a number of ways. Soil pollution happens when hazardous substances are buried or spilled into uncontaminated soil.

For example, environmental pollution can occur through human activity, such as when human beings apply agricultural chemicals like the use of pesticides and chemical fertilizers on farmlands or through accidental spills during industrial activity.

A more recent example of soil pollution is the case of Exide Technologies. Soil testing at sites surrounding the southern California battery recycling plant revealed pollution as the root cause of soil degradation. The California Department of Toxic Substances Control estimates that lead, arsenic and cadmium seeped into the ground and contaminated parks, schools and homes in several Los Angeles neighborhoods.

Other sources of contaminated soil include:

If you’re a project manager, you may have experienced a situation where the presence of toxic chemicals in the past caused soil pollution. Many companies do not know the land underneath them where a project is occurring is contaminated and may not know until the soil is excavated and taken to a nearby landfill for disposal where testing occurs.

It’s also important to note that land pollution or soil erosion can lead to secondary contamination of water supplies, and likewise, water pollution can seep into the nearby soil.

Soil contamination often falls into one of the following categories:

Sources for these inorganics typically include facilities where smelting occurs, plating shops and other industrial locations with various manufacturing processes.

Semi-volatile organic pollutants are a subgroup of VOCs that typically have a higher molecular weight and higher boiling point temperatures. Source materials slowly emit semi-volatile organics, which then divide until they settle as dust.

Fuels are often used to produce heat or power. They are materials designed to react with other substances to release energy. Examples include:

Sources include underground storage tanks, refineries and locations where oil-water separators are used.

Contaminated areas require soil remediation and treatment before a site can be considered decontaminated. There 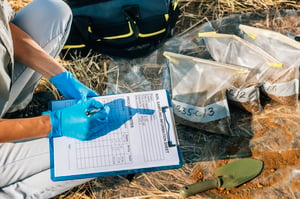 are several approaches to this clean-up procedure. The most common options include:

When a site undergoes containment, heavy-duty liners are typically placed under and around any contaminated solid to prevent the migration of contaminants into soil or groundwater. These liners must be periodically checked for damage, and additional sampling may be required. A landfill cap then serves as a barrier layer that prevents adverse effects on nearby areas.

Bioremediation uses organic materials to initiate biological processes in the soil that eventually will remove contaminants. Microorganisms such as bacteria and fungi are used in this process because they use the contaminant as a food source. Bioremediation is often used when mitigating pollutants like halogenated organic solvents and compounds, hydrocarbons, nitrogen compounds, some metals and non-chlorinated pesticides and herbicides.

Soil washing physically separates soil from its contaminants. During the washing approach, a solution comprised of cleaning fluid and water passes through a polluted soil sample. Contaminants are more likely to bind to fine-grained soil and silt, and soil washing effectively removes these fine-grained pieces from the larger soil sample.

The thermal treatment method moves contaminants in soil using heat. During this heating process, some contaminants are destroyed. Others move through the soil toward another place, such as wells, where crews collect them and pipe them to the ground surface. Also known as “in situ,” the heat is applied underground directly to the original area of contamination.

How Disposal Services Can Help

Whether an on-site accident has occurred that leads to soil pollution or contaminated soil is a complete surprise, hazardous waste disposal companies can help.

Keep in mind that even if you have excavated soil and have transported it to a disposal site, if testing done at the site reveals there are high enough concentrations of industrial pollutants present, you are still responsible for arranging for that soil to be transported from the landfill to the appropriate facility that WILL take the soil.

As a project manager or business owner, searching for a landfill that will accept your industrial waste can take a lot of time. Hazardous waste disposal services can help by removing the contaminated soil and transporting it to the appropriate facilities, even if those landfills are across state lines.

Experienced disposal companies have developed connections with hazardous waste disposal sites throughout California and across the United States.

When searching for a disposal company, make sure it offers hazardous waste determination services through sampling and profiling to determine soil quality. A licensed contaminated waste removal company will test and classify the soil early in the process so you aren’t surprised by a positive sample at the landfill. If the soil isn’t hazardous, you shouldn’t have to pay the added costs that come with specialized hazardous waste removal.