Lead Contamination In Soil: What To Do When You Discover It

Detecting lead-contaminated soil can halt a construction project, resulting in costly delays. It can also be an unsettling discovery, considering that contaminated soil continues to be a source of exposure to lead for young children in the United States, according to the Centers for Disease Control.

Properly disposing of contaminated soil is critical. Not ensuring soil contamination is properly treated and disposed of can lead to health risks for the community and harmful consequences for your business.

However, because time is often of the essence with any project that led to the unearthing of lead-contaminated soil, it’s also important for any business to know what to do with the soil once it is discovered.

How Did Lead Get Into Soil?

Lead can seep into soil a number of different ways. According to 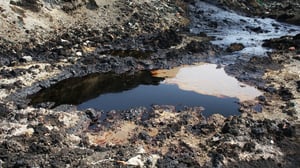 the CDC, lead in soil can come from leaded gasoline, exterior lead-based paint and industrial zones.

In southeast Los Angeles, soil testing revealed contaminated soil left behind from decades of pollution from the Exide Technologies battery recycling plant. A news report in 2015 revealed that California regulators believe as many as 10,000 homes in that area could have experienced lead poisoning or been exposed to unacceptable high levels of lead exposure.

Sometimes it can be a matter of owning a piece of property near a roadway or in urban areas since buildings near busy roads can have higher amounts of lead in the soil. That’s due to automobiles that use leaded gasoline releasing lead into the air. That lead then settles into the soil.

Older homes and buildings also can have a higher risk of high levels of lead being present in the soil, usually due to chipped lead paint or wood chips that fall off older structures and then mix with soil particles.

Often, project managers have no idea the soil underneath them is contaminated and may not discover this until the soil is excavated and taken to a nearby landfill for disposal. It’s there at the landfill that soil is tested for contaminants before final disposal.

If the tests reveal that there is too much lead present in the soil, you now must arrange for that contaminated soil to be transported from the landfill to the appropriate facility that will accept it since many will not take hazardous waste.

What Is An Acceptable Level Of Lead Contaminated Soil? 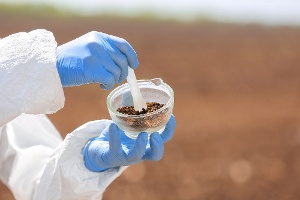 contaminates prior to having them transported to a landfill, you’re one step ahead. As we noted above, some projects come to an unexpected halt when landfill facilities identify lead in soil and cannot accept the delivery.

However, even if your samples return lead levels, it doesn’t mean you have “lead-contaminated soil.”

According to the California Department of Toxic Substances Control, soils with a total lead concentration of 80 mg/kg or less are considered acceptable for any use. The DTSC uses this value as a screening level for residential or unrestricted land uses. This data is based on public health research studies that looked at blood lead levels in humans and the health risks associated with them.

Soils with a total lead concentration of 320 mg/kg or less are generally considered acceptable for use at commercial or industrial properties as long as the DTSC provides written approval. Businesses may also face land-use restrictions to prevent “unacceptable risk,” according to the DTSC.

You may also be faced with the prospect of having to transport your soil out of state in order to dispose of it properly.

As a business owner or project manager, searching for a landfill that can accept your waste can be a timely and frustrating process. Professional soil disposal services can help you with this process, even if it means transporting your soil out of state in order for it to be treated or disposed of properly.

Experienced hazardous waste disposal companies have developed connections with landfills throughout California and across the United States to ensure your soil disposal goes smoothly and according to the law.

When looking for a disposal company, the best waste disposal services offer hazardous waste determination through sampling and profiling. A licensed contaminated waste removal company can help you by testing and classifying soil early in the process so you aren’t caught off guard by a positive sample for lead contamination.

This also ensures that you don’t have to pay for hazardous waste removal if you don’t need that particular service.

The best companies also develop a customized soil transportation plan, complete regulatory paperwork and provide you with proof that your lead-contaminated soil has been properly disposed of so that you have this proof for your records.

Make sure that you also:

Whether you’re being proactive as you begin a project that involves soil extraction or you’re unexpectedly facing contaminated soil results, it’s a good idea to have a hazardous waste removal company as a partner to help alleviate any headaches you may face and to protect your business.