3 Reasons Why You Shouldn’t Throw Away Your Electronic Waste

Just one computer and monitor can create a carbon footprint that is impossible to reverse.

From the moment these staples found in businesses across the United States are created until long after they are disposed of, this common form of electronic waste can have a significant impact on human and environmental health.

Consider this...According to the American Association for the Advancement of Science, it takes 500 pounds of fossil fuel, 1.5 tons of water and 50 pounds of chemicals to manufacture a computer and monitor.

Yet when this computer and monitor are no longer needed, it can take thousands of years to decompose in landfills. In the meantime, dangerous chemicals can leach into groundwater and soil, whether it’s the cadmium commonly found in chip resistors and wires, or the brominated flame retardants used in circuit boards and plastic casings.

Now imagine an entire company updating its entire network of computers or replacing circuit boards, spent batteries or outdated servers. While new technology can help businesses grow, it can also have a significant impact on the environment thanks to the number of natural resources used to create it.

Yet there are opportunities to ensure your company’s impact ends there. In fact, one of the most important steps you can take to protect human health and the environment is by ensuring proper electronic waste disposal. Throwing away your electronic waste in the trash should be avoided because:

You Could Be Breaking The Law 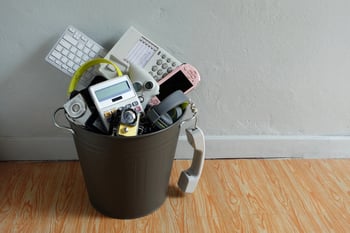 Although there are few federal laws against the disposal of electronic waste, at least 50% of states have e-waste laws on the books. This includes California, which is one of 25 states that has passed some type of electronic waste legislation.

California e-waste laws include some of the most comprehensive e-waste regulations for businesses and individuals. In the state, it is illegal to throw away several types of e-waste, such as old televisions, batteries, computers, cell phones, fax machines, copiers, stereos and more.

Many manufacturing and industrial settings also produce a significant amount of electronic waste that must be disposed of properly under California law, such as circuit boards to power supply units. In hospitals, e-waste streams may include lab equipment, computers, servers, tablets and televisions, to name a few.

To help combat the problem of cell phone disposal, retailers that sell cell phones are required by law to accept them from consumers for the purpose of electronic waste recycling. Since 2004, the California Cell Phone Recycling Act of 2004 requires retailers to offer this option to help encourage businesses and individuals to avoid illegally discarding cell phones.

The disposal of cathode ray tubes (CRTs) is also regulated in California. CRTs are found in computer monitors and are one of the new types of electronic waste that are classified as hazardous waste at the federal level by the Resource Conservation and Recovery Act (RCRA).

Chemicals Found In E-waste Are Dangerous

One of the reasons why so many states have laws against the improper disposal of e-waste is because of the dangerous chemicals found in many electronics.

Each of these substances carries its own risk to human or environmental health. For example, sulfur that is found in certain types of batteries can cause permanent damage to the kidneys and heart. Found in light bulbs and computer monitors, mercury can cause muscle weakness, impaired physical development and memory problems. Beryllium oxide, found in computer towers, can cause chronic lung diseases.

When these chemicals are improperly disposed of, they can accumulate in soil and water, causing the absorption of hazardous substances and the creation of by-products that can negatively impact human health.

A team of researchers reviewed evidence collected from a study that looked at the health consequences of exposure to e-waste. The researchers, who were from the WHO Collaborating Center for Children’s Health and the Environment at the University of Queensland, Australia, found that there is a plausible association between e-waste exposure and thyroid dysfunction.

The researchers also concluded that exposure to the dangerous chemicals found in discarded electronics could lead to adverse birth outcomes, behavioral changes, decreased lung function and adverse changes at the cellular level.

There Are Resources Available To Recycle E-Waste 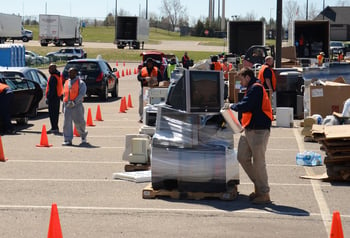 Every day, Americans throw out about 130,000 computers and 350,000 cell phones, according to the U.S. Environmental Protection Agency.

It’s no surprise then that the United Nations estimates that global e-waste volumes could reach nearly 75 million tons a year by 2030.

The good news is that there are several ways businesses and individuals can recycle or safely dispose of the electronic waste that they generate.

CalRecycle offers a directory on its website that provides the names and contact information for several companies that participate in the Covered Electronic Waste Recovery and Recycling Program.

However, it’s important to check with any facility you choose prior to drop off to determine what items that facility accepts. Not every site accepts the same e-waste items, which may force you to visit several different facilities to drop off your e-waste items.

While these sites can also be a great resource if you have no more than a carload of e-waste, if you are installing new computers in every office of your business or you have a substantial amount of e-waste you must safely discard, a waste disposal company may be a better option.

It can also be difficult to distinguish what exactly is e-waste versus electronics that can be safely disposed of on your own. Zinc plating, for example, is often found in steel production parts. Zinc plating is not considered hazardous. When zinc is paired with another material that is hazardous, however, the entire piece of equipment must be discarded as if it is hazardous.

Attempting to separate these toxic items from their non-toxic counterparts can be dangerous, and should only be done by experienced professionals with proper training.

It can be tempting to throw away an electronic device or piece of equipment that is no longer needed or no longer works. This decision can lead to substantial fines in California and even at the federal level if environmental damage that can be linked to your company occurs.

An experienced electronic waste disposal company can help you determine the best course of action so that you can ensure you have a proper waste management system in place … now and every step of the way.