Electronic waste is a growing problem worldwide, as each year seems to produce faster, more efficient pieces of phones, computers, televisions and other electronic equipment.

In fact, e-waste is one of the fastest growing waste streams globally. With that “out with the old, in with the new” mindset comes the question: How can electronic waste disposal efforts keep up?

To solve any problem, it’s important to know what you are up against. Here are 10 electronic waste statistics you need to know, and how you can ensure your electronic waste is properly and safely disposed of.

That’s equivalent to the weight of 350 cruise ships worth of electronics products, according to Fast Company. That figure is also 21% higher than the amount of electronic waste discarded just five years ago. By 2030, that number is expected to hit more than 74 million metric tons. 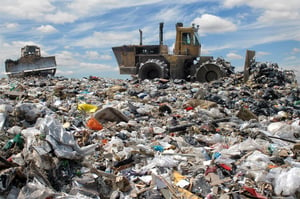 Experts say that across the world, many countries lack the necessary recycling infrastructure to keep up with this demand. In other parts of the world, only electronics that are the most profitable to recycle are set aside. The rest end up in landfills. Another significant problem is whether governments support recyclers to make the economic gain appealing.


With only 17.4% of electronic waste recycled in 2019, that means several high-value metals like gold, silver, copper and platinum were dumped or burned rather than collected and reused. According to the International Solid Waste Foundation, that waste is valued at nearly $57 billion U.S. dollars. That’s a greater number than the GDP of most countries.

4. The energy saved by recycling 1 million laptops equals what 3,657 homes use in a year.


That’s according to the U.S. EPA, which says e-waste is the fastest growing type of municipal waste stream in the United States. For companies that upgrade their computers, recycling their old ones can have a major impact on energy savings as well.

According to the EPA, for every million of those cell phones that are recycled, the following can be recovered:

6. It takes 530 pounds of fossil fuel to manufacture just one computer and monitor.


To manufacture this device, it also takes 48 pounds of chemicals and 1.5 tons of water, according to the Electronics TakeBack Coalition.

7. E-waste accounts for 70% of toxic waste in America.


Yet it only accounts for 2% of trash found in landfills. Some of the toxic materials that can be harmful to both the environment and to people include mercury, arsenic, cadmium and lead. Lead, in particular, can lead to neurological damage. Burning these materials won’t get rid of the toxicity, either. In fact, when toxic particles enter the air, they are breathed in by nearby residents or settle on surrounding plants and trees.

8. Only about half of U.S. states have e-waste laws.


Depending on where you or your company is located, it is important to know any local or state laws that you must follow. California, in particular, has several laws that address e-waste, including SB 20, the Electronic Waste Recycling Act, which provides cost-free recycling opportunities for consumers.

AB 2901, Cell Phone Takeback and Recycling, requires the state’s largest cell phone retailers to collect used cell phones at no cost to the consumer and properly recycle or dispose of them.

Other laws include AB 1125, Rechargeable Battery Takeback and Recycling, and AB 1419, CRT Panel Glass Recycling, both of which attempt to reduce the amount of toxic materials that end up in landfills.

9. Appliances are some of the largest contributors to e-waste.


In fact, one study found that about 60% of e-waste comes from appliances. This can include anything from heating and cooling equipment to washers and dryers or small appliances like coffee makers.


In addition to jobs created at recycling facilities, the e-waste management market size is estimated to generate more than $102 billion in revenue by 2027, according to Allied Market Research.

What To Do With Your Electronic Waste

If these statistics are worrisome, you’re not alone. Organizations across the globe are beefing up efforts to create solutions and promote awareness about this growing problem.

But what can you do?

However, if you’re a business, this might not be the most practical option, especially if you have a large number of electronics to dispose of or your electronic devices contain hazardous waste that requires special disposal.

A waste disposal company that specializes in electronic waste may be the better option to meet your needs.

A waste disposal company that is certified in safe e-waste removal can help you determine the appropriate course of action for your electronic waste and even help you identify potential waste you may have overlooked. This is important not only to protect the environment, but to protect your business against costly fines at both the state and federal levels.

While many drop-off sites are specific in what types of electronics and materials are allowed, a waste disposal company may be able to accept nearly all your e-waste … saving you multiple trips to different drop-off facilities.

Finally, a reputable company will be proactive and ensure from the beginning of your partnership that you have a system for handling your electronic waste in place. Proper management, which includes the storage, removal and disposal of your e-waste, is essential to ensuring your company is following all environmental regulations.