How To Protect Employees With Proper Solvent Storage and Handling

There are a lot of different health hazards associated with solvent exposure including but not limited to toxicity to the nervous system, organ damage, respiratory issues, cancer and skin impairment. In addition to the health challenges that employees face, solvents are generally composed of hazardous materials and as such it is important that companies employ proper solvent storage and handling protocols. 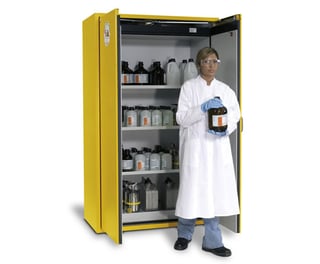 Millions of workers are exposed to solvents on a daily basis. Solvents are a commonly used item in most manufacturing and industrial operations.  They have a variety of uses such as cleaning, degreasing, dissolving materials and removing paint.

According to OSHA, in the early 20th century “there were only a dozen or so known and commonly used solvents.  By 1981 there were approximately 350 different solvents commonly in use in the United States.”

Here are a few training tips that can keep your workplace safe and limit employee accidents.

Train your employees to:

Keep your workers safe by following these common sense tips.