Radioactive waste is waste that contains radioactive material. It is hazardous to all forms of life and the environment.

Although the radioactivity of all radioactive waste weakens with time, the time that it takes to weaken depends on the type of radioactive waste. Some radioactive elements, such as plutonium-239, will remain hazardous to humans and other creatures for hundreds of thousands of years.

This is why it is so important that this type of waste is managed properly. This includes the possession, transportation, handling, storage, and ultimately disposal of radioactive waste.

If handled incorrectly, exposures of humans and animals to high-level radioactive waste can be dangerous, and even deadly.

Sources and Types of Radioactive Waste

According to the World Nuclear Association, "Radioactive waste is produced at all stages of the nuclear fuel cycle – the process of producing electricity from nuclear materials. The fuel cycle involves the mining and milling of uranium ore, its processing and fabrication into nuclear fuel, its use in the reactor, its reprocessing (if conducted), the treatment of the used fuel taken from the reactor, and finally, disposal of the waste."

In other words, most radioactive waste, both low-level (LLW) and high-level (HLW), comes from nuclear power plants, most of which use uranium as the primary resource in fission.

Currently, there are 60 commercially operating nuclear power plants with 98 nuclear reactors in 30 U.S. states, according to the U. S. Energy Information Association.

Low level waste is generated from hospitals and industry, as well as the nuclear fuel cycle. It is comprised of paper, rags, tools, clothing, filters, etc., which contain small amounts of mostly short-lived radioactivity.

The World Nuclear Association reports that in order "to reduce its volume, LLW is often compacted or incinerated before disposal. LLW comprises some 90% of the volume but only 1% of the radioactivity of all radioactive waste."

Intermediate-level waste  is more radioactive than LLW, but the heat it generates is not sufficient to be taken into account in the design or selection of storage and disposal facilities. However, ILW does require some shielding.

ILW is typically comprised of  resins, chemical sludges, and metal fuel cladding, as well as contaminated materials from reactor decommissioning. Smaller items and any non-solids may be solidified in concrete or bitumen for disposal. ILW makes up some 7% of the volume and has 4% of the radioactivity of all radioactive waste.

High-level waste (HLW) is sufficiently radioactive for its decay to increase its temperature and the temperature of its surroundings, so it requires cooling and shielding.

HLW contains the fission products and elements produced in the reactor core. HLW accounts for just 3% of the volume, but 95% of the total radioactivity of produced waste.

According to the World Nuclear Association, there are two kinds of HLW:

The Danger of Radioactive Waste

The exposure to the radiation in radioactive waste can be harmful and even deadly to humans and other living creatures.

In fact, the U. S Department of Veterans Affairs has recognized that the following diseases are possibly caused by exposure to ionizing radiation:

The radiation within LLWs is generally no higher than normal environmental levels and does not require shielding during handling and transport.

Because the radiation in ILWs is slightly higher, it does require some shielding in handling, transport and disposal.

HLWs definitely require cooling and shielding in their handling, transport and disposal.

All of the above wastes are regulated by federal and state governments to limit continued exposure and prevent possible environmental contamination.

Radioactive emergencies are especially serious, as exposure to even moderate levels of radiation could lead to a variety of health effects such as cancer, mutations, and in severe cases of exposure, acute poisoning.

Radioactive contamination could also partially or completely shut down your facility until a thorough decontamination is performed.

Due to the hazardous nature of radioactive waste, hiring a regular waste removal crew simply isn’t an option in most cases. 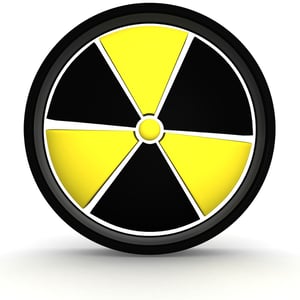 When you start looking into your options for a hazardous waste disposal company, remember that finding a company with the experience to handle your this particular waste stream is important.

Not many companies  are equipped to properly handle these dangerous kinds of waste.