One of the tough things about operating a business in the State of California is the difficult regulatory environment in the state. California has some of the strictest environmental laws on the books and the Department of Toxic Substance Control (DTSC) takes an active role in policing the environment.  By no means perfect, the state IS active in trying to protect its citizens from the dangers of illegally dumping hazardous waste near residential areas. 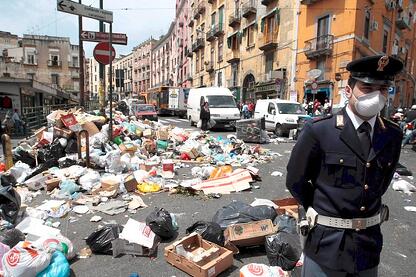 Sometimes it is helpful to look lift up our heads and look at what life could look like if we lived in a truly unregulated environment.

From the New York Daily News this week, “the “Italian Mafia” is being blamed for a huge rise in cancers in southern Italy after it was discovered the mob had been illegally dumping vast amounts of nuclear waste.” (Source: New York Daily News)

According to news reports “Cancer rates have increased 47% for men and 40% for women in the areas around Naples and Pompeii thanks to illegal disposal by Mafia-controlled companies that occurred during a 20-year period, in which the harmful substances were dumped into lakes, farmland, quarries and caves.” (Source: New York Daily News)

The BBC has a fascinating profile into the trial and the mafia informer whose conscience was too great to let this devastating activity continue and ultimately brought the illegal activity to light.  According to the BBC, mobsters were dumping the toxic sludge after winning a series of lucrative contracts to dispose of the hazardous material.

Millions of tons of nuclear waste were transported from Germany and dumped in lakes, on farmland, in quarries and caves in southern Italy close to Naples and not far from the world famous historical site of Pompeii.

We consult businesses every day on how to comply with hazardous waste RCRA laws. It can be a challenge to properly communicate the importance of handling hazardous waste in a compliant fashion. Many generators see the DTSC as the enemy, but as you can see from this story, they are there to ensure this sort of thing does not happen. After reading stories like this and truly getting an understanding of the life and death consequences of our actions as corporate citizens, it brings home our mission of helping companies properly dispose of their hazardous waste streams.

If you deal with toxic materials, you owe it to yourself, your employees and your community to handle your business the right way.  If you need help navigating the process, contact a properly licensed hazardous waste disposal company.  Too much is at stake!