In 1978, disco reigned on America’s airwaves; John Travolta was the “King of the Box Office” with both Grease and Saturday Night Fever in theaters that year, and a small neighborhood in Niagara Falls, New York known as Love Canal was making national and international headlines.

Love Canal became the subject of media attention after it was revealed in a two-year investigative series in the Niagara Falls Gazette that the site had formerly been used to bury 21,000 tons of hazardous waste by Hooker Chemical Company (now Occidental Petroleum Corporation). 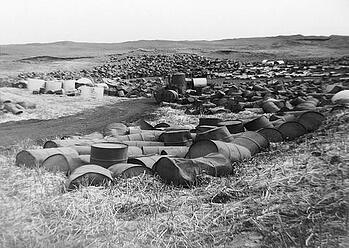 In the 1940s, the Hooker Electrochemical Company (later known as Hooker Chemical Company), was in need of location to dump the large quantity of chemical waste it was producing.  Hooker was granted permission by the Niagara Power and Development Company in 1942 to dump wastes in the area known as “Love Canal,” which was being used as a municipal dump at the time.

Once permission was granted, the canal was drained and lined with thick clay. Into this site, Hooker began placing 55-US-gallon (210 l) metal or fiber barrels. In 1947, Hooker bought the canal and the 70-foot-wide (21 m) banks on either side of the canal.

In 1948, after World War II had ended and the City of Niagara Falls had ended its  disposal of refuse, Hooker became the sole user and owner of the site.

This dumpsite was in operation until 1953. During this time, 21,000 tons of chemicals such as "caustics, alkaline, fatty acids and chlorinated hydrocarbons from the manufacturing of dyes, perfumes, solvents for rubber and synthetic resins" were disposed of in the site. These chemicals were buried at a depth of twenty to twenty-five feet.  This practice continued until 1953 when the canal was then covered with soil, and vegetation began to grow atop the dumpsite.

At the time of the toxic dump's closure, the city of Niagara Falls was entering a period of economic expansion and rapid population growth, surpassing 85,000 residents. The Niagara Falls City School District needed land to build new schools, and wanted the Love Canal site.

According to reports, Hooker Chemical initially refused to sell the site citing safety concerns; however, the school district refused to back down. Eventually faced with parts of the property being condemned and/or expropriated, Hooker Chemical agreed to sell on the condition that the board buys the entire property for one dollar.

Hooker Chemical sold the dump site to the Niagara Falls School Board who were desperate to build schools and housing on the site in 1953 for $1 with a deed explicitly detailing the presence of the waste, and including a liability limitation clause about the contamination.

The city ignoring warnings from its architect began construction of an elementary school on the site and later sold off parcels for the development of homes. The construction efforts associated with housing development, combined with particularly heavy rainstorms, released the chemical waste, leading to a public health emergency and an urban planning scandal.

Michael Brown, a reporter for the Gazette who began an investigation into potential health effects by an informal door-to-door survey in early 1978. As a result of his survey he found a high incidence of birth defects and many anomalies such as enlarged feet, heads, hands, and legs. He advised the local residents to create a protest group, which was led by resident Karen Schroeder, whose daughter had many (about a dozen) birth defects.

The New York State Health Department followed suit and found an abnormal incidence of miscarriages. Love Canal was declared an unprecedented state emergency on August 2, 1978. Mr. Brown, who wrote more than a hundred articles on the dump, tested the groundwater and later found the dump was three times larger than originally thought.

On August 7, 1978, United States President Jimmy Carter announced a federal health emergency, called for the allocation of federal funds and ordered the Federal Disaster Assistance Agency to assist the City of Niagara Falls to remedy the Love Canal site, marking the first time in American history that emergency funds were used for a situation other than a natural disaster.

As a result of the emergency, the government relocated more than 800 families and reimbursed them for their homes, and the United States Congress passed the Comprehensive Environmental Response, Compensation, and Liability Act (CERCLA), or the Superfund Act.

While Love Canal was a prominent event and ultimately received great publicity at the time, it was not an isolated event.  Eckardt C. Beck, Administrator of the EPA during the Love Canal crisis, suggested that there are probably hundreds of similar dumpsites. President Carter declared that discovering these dumpsites was "one of the grimmest discoveries of the modern era."

There are currently hundreds of Superfund sites across the United States managed by the EPA.  Businesses must be aware the Superfund Act carries a retroactive liability provision, meaning if you make the mess, you must clean it up. Along with the Cuyahoga River Fire of 1969, Love Canal remains one of the most important events in U.S. Environmental history.